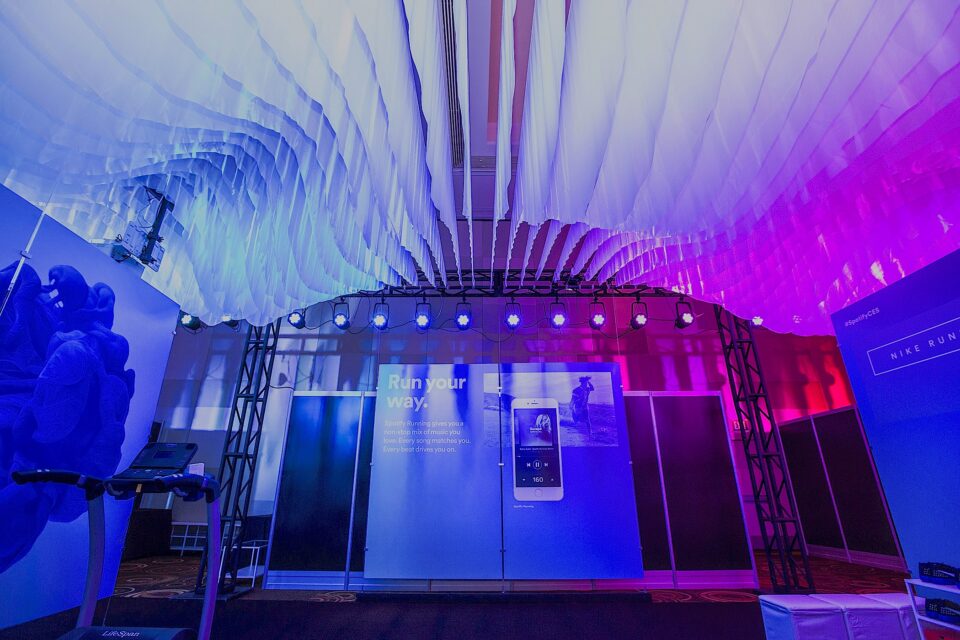 2016 was a year of exploration and innovation for the Originators.

More complex custom design and manufacturing has pushed us in some new and exciting directions and continues to raise our game.

A few challenging projects in particular required us to re-think solutions and alter our design approach and manufacturing method to better meet the realities of budget, design and desired aesthetic.

Out of this successful series of projects has come a new approach to sculpting in space – where our installations yield memorable results and define space in a whole new way.

To illustrate Atmospherics best is to share some details and images from three of the more exciting projects that required us to think differently about volume and how to impact and shape an open space.

The first of our clients was designing a lounge for an on-line music-delivery service. They wanted to create a drop-ceiling that would somehow visually interpret a sound wave.

The design called for over 120 individual, sheer fabric panels that were laser cut – each with slightly different degrees of curves. When hung, as if from a clothesline, one-foot apart and parallel to one another, the entire look naturally shifted the focus away from an unsightly convention hall ceiling to what was now an undulating, visually compelling, wave-form. Atmospherics!

The repetition of the panels, each one different than another, works on the same persistence-of-vision principal of motion pictures and lends an animated visual effect to an otherwise uninvolved, not to mention ugly, ceiling area.

Using this theory as a springboard, our 3D designer, Hangrok Cho, delivered a series of inspiring algorhythmic designs that informed Debra’s vision of sculpting the negative space into uniquely shaped immersive environments.

From entryways and tunnels to ceiling designs and mazes, Atmospherics are enhancing settings as diverse as art galleries and gaming stations.

By coincidence, our second client also had a lounge design in need of a unique ceiling structure. They, too, wanted to not only take the focus away from an unsightly ceiling but they wanted to give the overall space a more intimate and warm feeling.

The fabric ceiling design, comprised of a series of sheer fabric panels, hung parallel, was intended for a holiday concert at Madison Square Garden. With only a few hours to install, each panel was suspended across truss towers above the entire width of the space. Then an LED lighting package was put in place and the panels captured an ever-changing lighting design, giving the impression of an undulating wave when viewed all together. The diaphonous sculpture came alive. This all created the sensory-stimulus environment the client was seeking.

The repetitive form of the Atmospherics became its own animated structure and not only took the attention away from a nasty looking ceiling but transformed the space into a more intimate and inviting space while cleverly reinforcing the brand’s core business.

Our third challenging project came out of a collaboration with one of our favorite clients, Chemistry Creative and their client Future Archives.
They were creating a community party space/art installation under I-95 in Miami for Art Basel.
An array of large-scale panels were to be ‘floated’ from truss towers giving the pop- up space an especially mysterious vibe.

Outer sheer walls, 30’w x 15’h surrounded the space. Then a mix of smaller panels created a layered and overlapped pattern that afforded a maze-like, diffuse feel to the space.

As night fell, a video artists’ projections onto the transparent surfaces gained resolution and added to the exciting, immersive experience.

Never as easy as it looks, Debra personally installed the structures with a local, Chem Creative crew.

Atmsopherics have a wide array of applications and functions limited only by the imagination and are gaining in popularity. The idea of “instant ambience” with an aura of mystery has had an appeal since cavemen first lit a torch inside a dark cave.

We welcome the opportunity to discuss individual needs for the Atmospherics’ approach to sculpting in space.