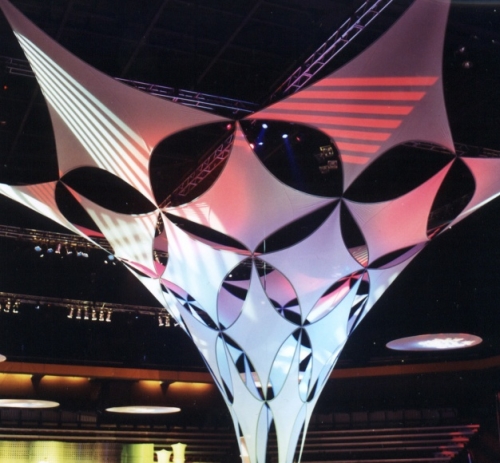 We are very excited to present “The History of Tension Fabric Structures Part 2.” as told by Nicholas Goldsmith and published in the IFAI‘s magazine, Fabric Architecture in May 2013.  It was fascinating to us, especially, in particular, as we share a part of that history. Both of the principals of the Originators’ were represented by their former companies which were cited in this article.   And, to further the “small world” aspect of the industry,  they’ve both worked with Charles Duvall on a variety of projects over the years.   So here is the story on the Interior Textiles, Part 2.

Detailing the development of an industry.

Besides the developments described in Part 1, another critical path in the development of tensile fabric interiors also started during the 1980s. Bill Moss, well known since the 50s for his design of lightweight camping tents, introduced a stretch fabric display for trade shows and events. He started with the Moss indoor dome in 1988 as his trade booth for the Outdoor Retailer tradeshow in Salt Lake City, Utah, and introduced new designs for trade show structures from 1989–93. Interest from the trade for collapsible shelters at tradeshows, inspired by open air market canopies, led to a standard line of 12 products and graphic signage. After 11 years as a brand, Moss Inc. developed into a sculptural branding company and continues today.

Moss’ assistants and collaborators at the time were the artists Cindy Thompson and Charles Duvall. Cindy eventually left to start her own firm called Transformit Inc., known worldwide for designing, fabricating and installing stretch interior spaces, event structures and sculptures such as the Head First! Theater in Cleveland, Ohio.

Charles Duvall also started his own firm, Duvall Design Inc., that designs, fabricates and installs interior and mesh outdoor structures. Some of the work includes shade elements and trade show interiors and even children’s amusements.

Through Bill Moss and these companies, a new industry for interior fabric environments was created in the U.S. Other firms not mentioned above, such as Eventscape Inc. and Pink Inc., joined this industry to make it a multimillion dollar industry.

An example of Eventscape’s work is a 468m2, six-ringed feature at the Mall of America that is sloped to match the curvature of the ceiling. The printable block-out textile is an ideal solution for this project because the rings appear solid, providing an even glow with a subtle gradient in the printed colors. The placement of the textile seams was specified by the designer.

On the other side of the Atlantic, the firm Architen began in England in the 1990s to develop soft interior spaces under the eye of Alex Heslop. When Architen merged with Landrell in 2001 to become Architen Landrell, it continued to develop interior environments including many well-known interior spaces in Europe, such as the dining area in the renovated British Museum in London and the four quirky seminar pod spaces for the Institute of Cell and Molecular Science, Queen Mary, University of London, within an atrium court in Whitehall, London. The University of London spaces range from a delicate, fabric-wrapped oval spacecraft to one that looks like a spiky deep-sea creature dressed in black oil skin. The pods provide a series of meeting rooms for the university staff and students.

Frei Otto, the 20th-century founder of the exterior tensile structure, developed his early designs in the 1960s with the circus tent manufacturer Peter Stromeyer of Konstanz, Germany.* Stromeyer saw in Otto a new approach to tent design and developed many of the revolutionary early tensile structures of the 60s for several German National Garden Shows.1 Stromeyer’s daughter, Gisela Stromeyer, worked for this author in New York in the 90s. When she left FTL, she opened her own studio to design and build soft interior spaces in both Germany and the U.S. Her work includes spaces such as the showroom in New York City, N.Y., for the American fashion designer Tahari and the Icognito Club in Zurich, Switzerland. Gisela’s design approach uses a point support system, rather than a perimeter framework, which gives the spaces a light scalloped quality.

It was not until the late 90s that interior architects and designers accepted this fabric technology for stores and indoor commercial use. The latest development in the acceptance of fabrics in interiors is in the hotel and hospitality industry where restaurants, clubs and hotels use stretch interior elements as just another construction element. Today more than 10 firms specialize in interior environments, from simple planar elements to extremely shaped volumetric spaces.

Recently, fabric art elements used to create 3-D forms have become so large that they change the definition of interior spaces. The most impressive type of installation is by the British artist Anish Kapoor. His “Marsyas” sculpture, constructed at the Tate Modern art museum’s Turbine Hall in 2003, consists of three welded steel rings 150m apart between which is suspended a taut PVC-coated membrane custom dyed blood red. The woven polyester PVC fabric was custom patterned to take the unusual shape. The structure fills the entire hall (3,500m of fabric and 40 tons of steel), necks down and then opens up into a vertical space at the bridge element in the middle that spans the space. Anish Kapoor states that he doesn’t “wish to make sculpture about form…I wish to make sculpture about belief, or about passion, about experience that is outside of material concern.” 2

A multitude of fabrics is available for interiors. Stretch fabric is used whenever possible because it eliminates the need for perfectly patterned shapes and provides wrinklefree surfaces. Stretch fabrics today are generally knitted polyester or nylon fibers. The first stretch fabric was manufactured by DuPont in 1959. Spandex, as it is called in North America or elastane in Europe, is classified as an elastomeric fiber. An elastomer is a natural or synthetic polymer that, at room temperature, can be stretched and expanded to more than twice its original length. After removal of the tensile load it will immediately return to its original length. Along with spandex, rubber and anidex (no longer produced in the U.S.) are considered elastomeric fibers. The famous brand name known for spandex is Lycra® (originally produced by DuPont), also sometimes used as a generic name. Often spandex is mixed with nylon or cottons and can be knitted to make a four-way stretch instead of a two-way stretch.

Most fabric can be flameproofed, but the best are the inherent flame retardant fabrics such as Trapeze®, which is 90% polyester and 10% spandex. There are seven different Trapeze fabrics including a water repellent one and a new Eco-Trapeze® fabric made from recycled postindustrial waste and postconsumer plastic bottles. It has a slight off-white look, unlike the bright white color of virgin polyester. In addition, there are stretch net fabrics, some with honeycombs and some designed specifically for projection surfaces. 3

Generally, interior fabrics need to be taken down and cleaned over time and unless the fabric is inherently flameproof, the flameproofing wears off with each cleaning. Today, fabricators use zippers at seams so sections of the fabric can be taken apart in pieces, cleaned and reinstalled without major effort. Often the clients are provided with two sets of fabric elements so they can rotate out the fabric elements without any downtime to the installation.

The design process is different for each designer, but in general, unlike large scale outdoor structures where one goes from a small physical model to a computer finite element formfinding program and then to computer patterning, interior fabric designers often work on a smaller scale and are able to construct mockups or first article demonstrations of their design at their facility. For this reason there is a strong craft quality to the design and implementation which is non-existent in large-scale exterior structures. Most interior design tensile structures are designed and fabricated at the same place, so there isn’t a separation between designer, engineer and installer as there is with outdoor structures. As a result, most designers of interior environments are first trained as designers and artists and then enter the industry, realizing a need for control over the manufacturing process.

In the 40 years of its existence, interior fabric structures have moved out of the realm of art installations into a mainstream commercial business model. Interior designers have accepted this technology as a unique way to create soft transparent and translucent organic spaces that would not be possible using other materials. These membrane structures will soon be seen as another type of fabric element for the interior designer just as drapes and curtains are today. The tensile fabric interior will become as familiar as the four-posted, tented bed of the past, only its language will signify something modernist and futurist, rather than historical and traditional.

3. Dazian’s fabric selections and specifications can be reviewed at www.dazian.com.