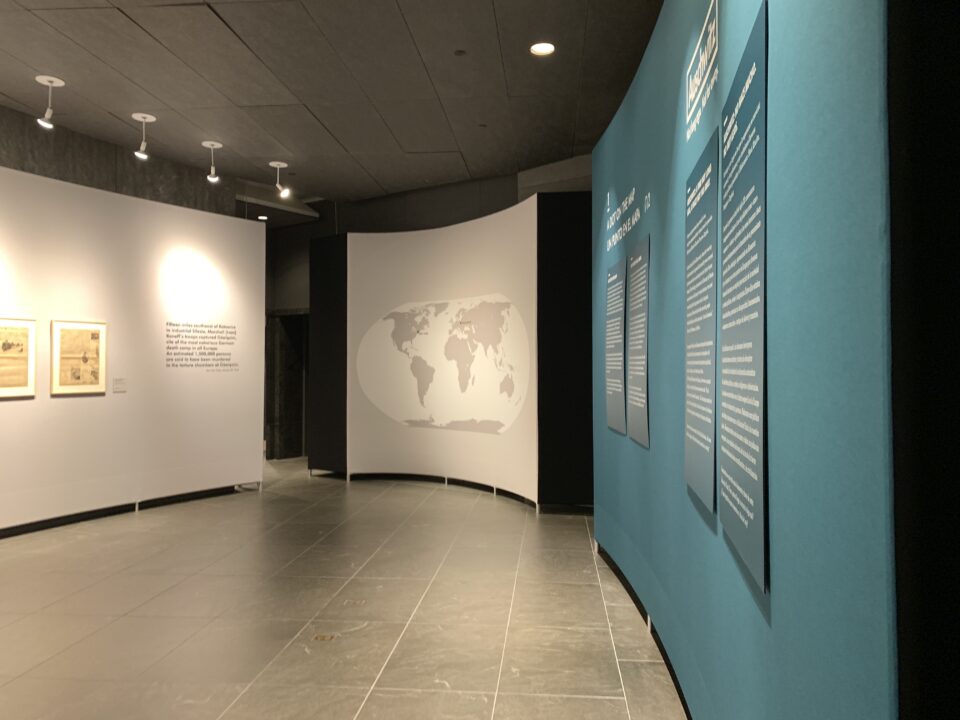 The Originators are especially proud of their long-standing relationship with the Museum of Jewish Heritage here in New York City. Over the years, they have earned the museum’s appreciation, respect and trust and have become their “go-to” designers and builders of all things fabric.

They value the Originators precision, high-quality craftsmanship, dedication and responsibility to every project along with their excellent customer service. The Originators prize this relationship and were especially pleased when Michael Stafford, VP for Operations and Maggie Radd, Sr. Manager for Exhibitions came to them with an exciting, landmark, new project: “Auschwitz. Not long ago. Not far away.” 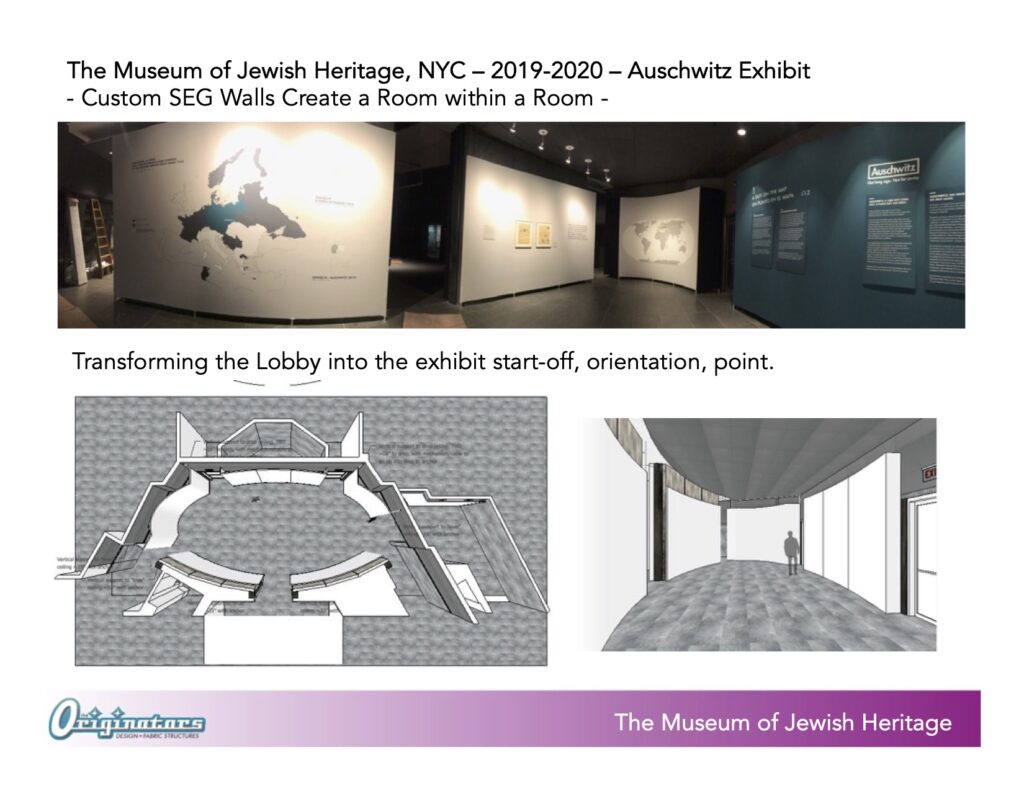 “This groundbreaking exhibition brings together more than 700 original objects and 400 photographs from over 20 institutions and museums around the world. Auschwitz. Not long ago. Not far away. is the most comprehensive exhibition dedicated to the history of Auschwitz and its role in the Holocaust ever presented in North America, and an unparalleled opportunity to confront the singular face of human evil—one that arose not long ago and not far away.”

The greatest challenge was the transformation of a pre-existing permanent donor display into an initial gathering space for the attendees. The museum and exhibit designers knew that they wanted a “holding room” – a space to collect guests, allow them to settle down and transition from their quotidian lives to the especially harsh reality of the exhibit ahead.

The room-within-a-room has an enveloping feel with 12’ tall, frame and fabric, surrounding walls. And the walls contain proportionately, a relatively small amount of graphics which allows for large swaths of deep, rich calming blank space; Ideal for resting the eye and preparing for the difficult exhibit ahead. The graphics provided just enough context for WWII and the notorious death camp to orient the attendee for what’s to come. This calming space /holding room was a wise idea borne from previous experiences with guests who felt they needed time and space to transition and compose themselves before entering the display. 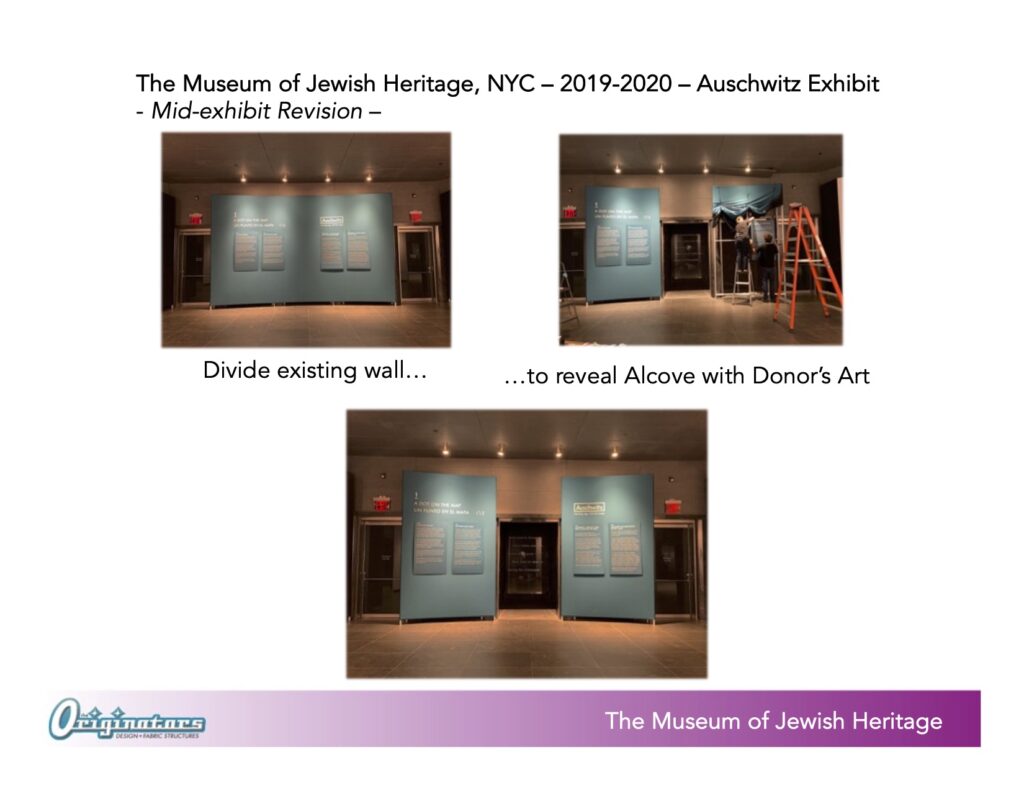 The Originators also created projection surfaces around the exhibit with a series of form-fitting stretch-fabric covers. The precision and high-quality craftsmanship belie the outward simplicity of these structures. 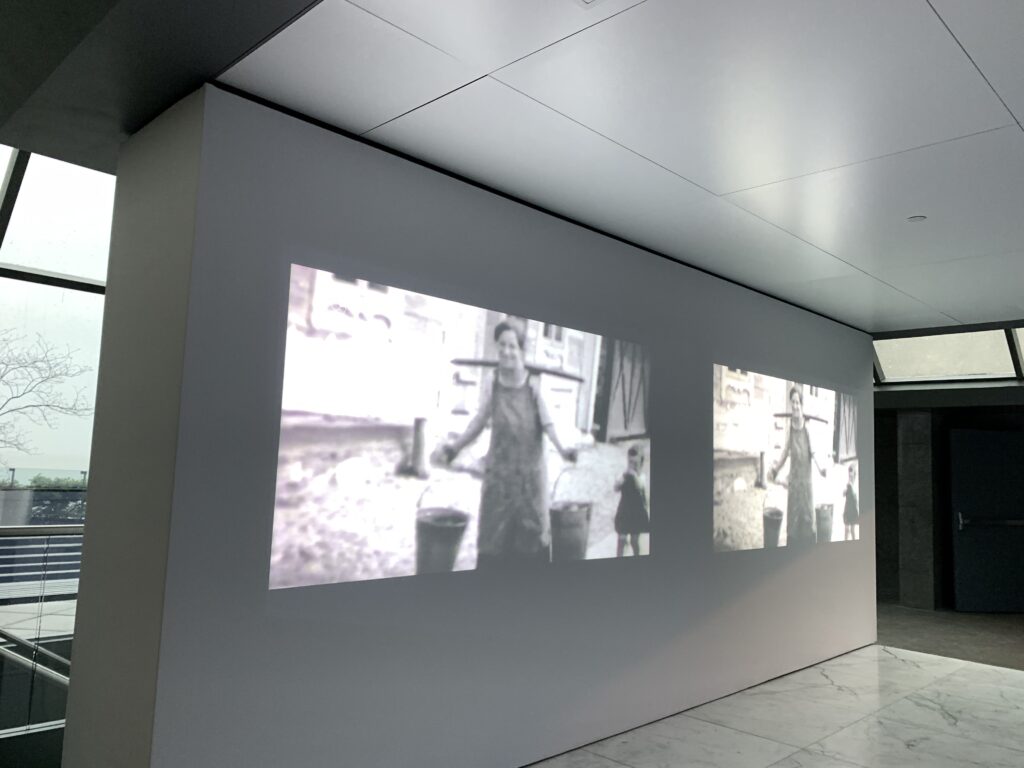 We worked hand-in-hand with Maggie Radd and Michael Stafford of the MJH and with Luis Ferreiro, the exhibition director in Spain where the exhibit premiered and Anna Biedermann who created and art directed all the exhibit’s brilliant graphics. And finally we had the honor of working with Dr. Robert Jan van Pelt who is one of the world’s leading authorities on the history of Auschwitz. From 1997-98, he presided over the team that developed the master plan to preserve the Auschwitz camp and participated as an expert witness in the famous case against the British historian and author David Irving (London, 1998-2001), a Holocaust denier.