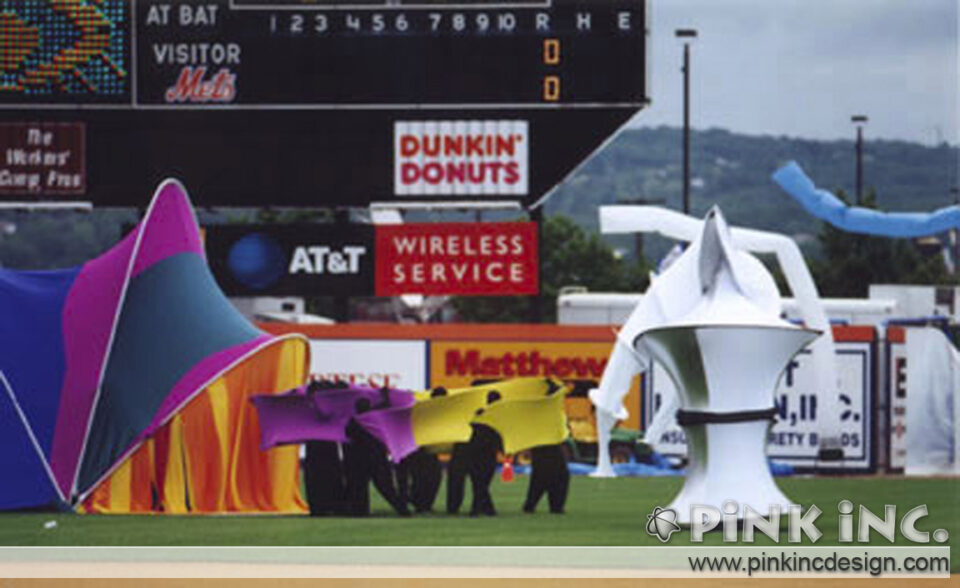 Ok, it’s summertime and it’s nostalgic. History, circa 1998 we are at Mets Stadium.  That is in Binghamton, New York.  A small city with the farm club stadium for the New York Mets.  Me and my company, was hired to design and build an opening ceremony for the Olympics, the New York State Olympic Games.

The topic we choose was an Alien Sighting and subsequent Landing on the field. We would work with a local dance troupe called the Rod Serling Dancers, in honor of the writer of the Twilight ZONE (and much more!)  We quickly realized everything was going to go just swimmingly! The Chrysalis arrived exactly as the newscasters predicted!

Truth be told it was a lot of fun and work and creativity and I got to WATCH IT! I was in the box seeing this amazing large scale sculptural story unfold before my eyes!  Take a look at the photos from that performance.

Some of these characters, such as La Hoopla, became seasoned art in motion characters. And we have been asked to revive the Hoopla for a festival this season.  So the fun continues to Festival ON!

Take a look our post about the Hoopla, this year at the Wildflower Festival.  Of course you know by now, The Chrysalis is the stadium show where my former company developed La Hoopla. To that end, we are reminiscing about this Olympic Opening Ceremony Show and this is a shout out to all of us who worked on it, we want to hear from you!  Any photos, videos are great memories…..please share!